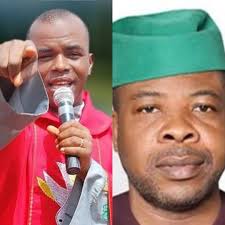 Reverend Father Ejike Mbaka, the Spiritual director of Adoration Ministry Enugu Nigeria, called the former Governor Emeka Ihedioha, on phone to plead with him to withdraw the petition (to reclaim his mandate), leveled against Governor Hope Uzodimma at the Supreme Court, or risk going to Jail.

Fr Mbaka equally pleaded with Ihedioha to stop seeing him as a political enemy, but a massager of truth from the Almighty.

Ihedioha’s statement was released by his spokesman, Chibuike Onyeukwu and made available on early hour of today.

The former Governor said that the truth remains that Fr Mbaka is quite convinced that sacking redress from the Supreme Court is founded on clear illegitimacy, and nothing will stop him from reclaiming his stolen mandate